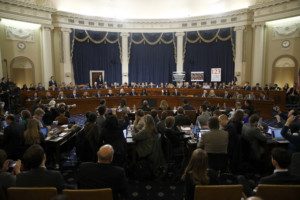 Members of the committee work during a House Judiciary Committee markup of the articles of impeachment against President Donald Trump, Friday, Dec. 13, 2019, on Capitol Hill in Washington. Trump impeachment goes to full House after Judiciary panel approves charges of abuse of power, obstruction of Congress. (AP Photo/Patrick Semansky, Pool)

As expected, the U.S. House Judiciary Committee has approved two articles of impeachment against President Trump. The vote came this morning, after the committee spent more than 14 hours in a heated debate yesterday.

The vote split sharply along party lines, with 24 Democrats on the committee voting yes and the 17 Republicans voting no.

This means the impeachment debate will move on to the full U.S. House for a possible vote next week. Analysts say that because Democrats control the U.S. House, it’s expected that the impeachment articles will pass, sending the matter to the Republican-controlled U.S. Senate for a trial, which is not expected to end in the President’s removal from office.

Republicans on the U.S. House Judiciary Committee had insisted on votes on a series of amendments aimed at killing the charges against President Trump.

This morning, President Trump tweeted his approval of the Republican effort, calling the GOP lawmakers on the panel “warriors.”  The President denies doing anything wrong.

All day Thursday, the committee clashed in pointed and at times emotional debate, drawing on history and the Constitution to argue over the two charges President Trump faces. He is accused of abusing his presidential power in pressuring Ukraine to investigate political rivals and then obstructing Congress by trying to block its investigation.