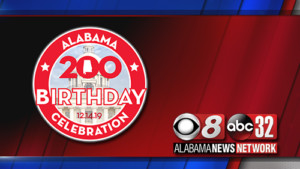 Alabama celebrates its bicentennial. State officials have a complete weekend full of events in downtown Montgomery to commemorate 200 years since Alabama became a state on Dec. 14, 1819.

The Saturday celebration begins at 10 AM with a parade of Alabama people, places and history. From Court Square Fountain, a cavalcade of marching bands, city floats, living history on wheels-such as the USS Alabama Battleship Park and US Space and
Rocket Center-elected officials, cute kids, beauty queens and special Alabama notables will travel Dexter Avenue toward the State Capitol. More than 70 entries from around the state showcase our Alabama communities. The parade will conclude with the more than 150 member Bicentennial All Star Band performing an original composition: Something in the Water By: Anthony Krizan, Cheryl DaVeiga, Jerry Foster and Robert W. Smith

Midday ceremonies led by Governor Kay Ivey will include the official dedication of  Alabama Bicentennial Park. Located at the foot of the Alabama State Capitol on Dexter Avenue, the park will tell the story of Alabama in 16 bronze plaques mounted on
Alabama granite bases.

State Capitol Complex, Department of Archives & History, and Downtown Montgomery The afternoon will offer exhibitions, performances and open houses in the Capitol Complex, up and down Dexter Avenue and throughout downtown Montgomery. The Alabama State Capitol and Alabama Department of Archives and History will host performances and presentations in their buildings and children’s games, traditional arts/crafts demonstrations and historic reenactors on their grounds. Museums, galleries, restaurants, and stores will host tours, exhibitions, and activities. The Alabama State Council on the Arts Gallery, in partnership with Black Belt Treasures Cultural Arts Center from Camden, will feature exhibits and sales of works by contemporary Alabama artists.

Alabama State Council on the Arts

Information on the Alabama Bicentennial Finale Concert is coming. Check back often for special announcements about performers and schedule!