The Ozark police officer and suspect involved in a shooting Thursday night has been identified.

Ozark PD has identified Samuel Yoh as the officer who was shot multiple times and is fighting for his life.

Alabama News Network’s ABC affiliate, WDHN reports the deceased suspect involved in the shooting has been identified as Bradley Allen Cutchens, 23, of Ozark.

According to the Ozark Police Department, the shooting happened around 9:50 p.m. while officers were responding to a call in the 100 block of Briar Hill Court. Officer Yoh responded to the area where he observed an adult male carrying a rifle. Yoh got out of his patrol vehicle and the suspect immediately opened fire, striking him and the cruiser multiple times. 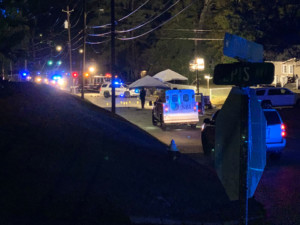 The officer was transported Thursday night to Southeast Health in Dothan where he remains in critical condition. Ozark Police Chief Marlos Walker requested the ALEA State Bureau of Investigation to conduct an independent investigation into the shooting.

According to the Montgomery Police Department, Yoh has been on the streets for only 8 months and will soon be a father to his unborn baby girl, Rosie.