Three people are in the hospital with serious injuries — and dozens of homes were damaged by storms Monday night in Marengo County.

Two mobile homes in the Salt Well community were completely destroyed the storms.

One trailer was vacant — but a mother and her two daughters were inside the other one — when the storm hit. 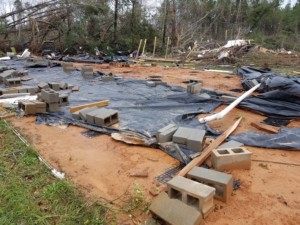 “My niece lived here with two daughters. Patricia Wright, Adrianna Quinton and Zanada Wright. All three of them is in the hospital,” said Bessie Smith.

“They are alive, and that meant everything — because you can get things, you can rebuild and get things but you can’t get that life back.”

EMA officials say a preliminary assessment of the damage — suggests it may have was caused by a possible EF-2 tornado.

Weather experts say an EF-2 tornado can cause considerable damage to property — with winds that range from 111 — to 135 miles per hour.