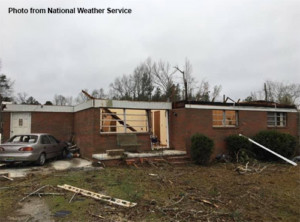 The National Weather Service says its preliminary reports show an EF-2 tornado with winds estimated at up to 120MPH hit an area of Marengo County on Monday as a line of severe storms pushed through the state.

Alabama News Network was on the scene with Thunder Truck in the aftermath of the storm.

The area that was hit was in the Salt Well community on U.S. Highway 80, just southwest of Demopolis.

Two mobile homes were destroyed, and three people were injured.

In neighboring Perry County, a few trees were down along County Roads 47 and 49 and along Highway 5 from Heiberger north to the Bibb County line. Power outages reported in this area as well.