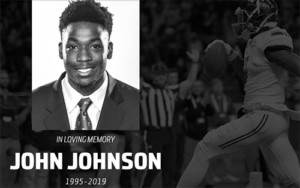 Troy University has announced that John Johnson, a standout wide receiver from 2014-17, has died after a motorcycle crash in Jacksonville, Florida.
According to Jacksonville TV station WTLV/WJXX, the police report says Johnson was trying to pass a truck on his motorcycle yesterday when he hit the back side of the truck and was thrown to the ground. He was pronounced dead at a hospital.
Johnson was a member of Hall of Fame head coach Larry Blakeney’s final signing class prior to the 2014 season out of Charles Henderson High School in Troy. He played in all 12 games his true freshman season and again as a sophomore in Neal Brown’s first season as head coach.

In his final game wearing a Troy uniform, Johnson caught one of his four career touchdown passes and was on the throwing end of a two-point conversion in Troy’s record-setting victory in the 2017 New Orleans Bowl.

He was nominated for both the Wuerffel Trophy and Allstate Good Works Team and was named to the Sun Belt Conference Leadership Team in the spring prior to his senior season.

Johnson was an all-state selection on the football field for Charles Henderson and helped guide the CHHS Trojans to back-to-back baseball state championship as the starting center fielder.

Funeral arrangements will be shared when made available by the family.

“We are absolutely heartbroken to learn of John’s passing,” Troy University Athletics Director Brent Jones said. “He leaves behind quite a legacy by the impact that he made on Troy Athletics, Troy University and the Troy community. John was everything you could ask for from a student-athlete. He represented the name on the front and back of the jersey with class and dignity in the classroom, on the field and in the countless community service projects he championed. Our love, thoughts and prayers go out to John’s family, friends and teammates as we mourn the loss of a life taken too soon,” he said.

“It tears you up to hear this kind of news,” Blakeney said. “John was a great kid, very giving of his time and just a bona fide young man. We had the pleasure of recruiting him out of Charles Henderson High School, and he was by far the best player we had the chance to sign from across the street. On the field, he stepped right in as a true freshman and contributed to our football team. Off the field, he was mature beyond his years. Janice and I extended our deepest sympathies and condolences to John’s family, friends and teammates,” he said.

“I was devastated to learn of the passing of John Johnson yesterday,” former Troy football coach Neal Brown said. “John was a great representative of his hometown Troy, the Troy football program and Troy University. On the field, I will always remember John’s knack for trick plays and his strong performance in his last game in the 2017 New Orleans Bowl. More importantly, I will remember John’s big smile, how he loved children, and how he led our football team in community service for three years in a row. My thoughts and prayers go out to his family, friends, and former teammates. An immensely talented young man, gone way too soon,” he said.

The Latest: Cilic upsets No. 5 Rublev to reach 4th round