Suspects Arrested in Connection to Stolen Vehicle Were All Juveniles 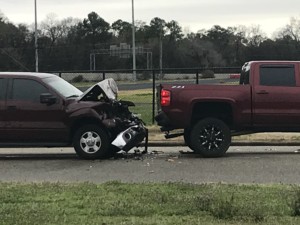 The four people arrested in connection to stealing a vehicle and later hitting a police unit were all juveniles.

The suspects were charged with six counts each of unlawful breaking and entering a motor vehicle in reference to multiple vehicle break-ins that occurred on January 2 between midnight and 6 a.m. near Sugar Pine Drive.

One of the juveniles received an additional charge of first-degree theft of property in connection to a stolen vehicle in the 600 block of Pride Drive later that day and a second-degree assault charge for hitting an occupied police unit.

Montgomery Police say they later arrested a fifth juvenile early Friday morning and charged with six counts of unlawful breaking and entering in connection to Sugar Pine Drive and also charged with an additional three counts of unlawful breaking and entering for vehicle break-ins that occurred in the 3900 block of Woodley Road.

Officials say the driver of the vehicle then reversed it and struck the police vehicle. Thankfully, the officer was not injured.

Spieth among PGA favorites in quest for career Grand Slam