Update: Tua Tagovailoa Expected to Announce Decision at 11AM Monday 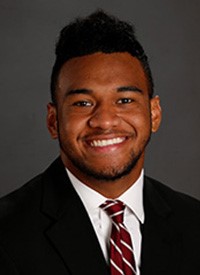 Injured Alabama quarterback Tua Tagovailoa and head football coach Nick Saban have announced a news conference at 11AM Monday on campus. It is expected that Tagovailoa will announce his decision whether he will return to the Crimson Tide or enter the NFL draft.

Tagovailoa is recovering from season-ending hip surgery and has not played since being injured at Mississippi State on Nov. 16.

He had surgery two days later.

Tagovailoa, a junior, is considered one of the top quarterback prospects in the country. He seemed a likely top-five NFL draft pick before the injury.

The severity of his injury makes his value more uncertain, though doctors who have treated him have said a full recovery is expected.

Alabama News Network will be in Tuscaloosa for the news conference with coverage throughout the day on CBS 8,  ABC 32 and on our digital platforms.

(Copyright 2020 The Associated Press contributed to this report. All rights reserved. This material may not be published, broadcast, rewritten or redistributed.)