Confirmed a second person was injured in the shooting

The teenage suspect in the shooting death of Lowndes County Sheriff “Big John” Williams was in court in Hayneville this morning for his preliminary hearing, and will now face a grand jury a judge says.

This was the second time 18-year-old William Johnson was marched into the Lowndes county courtroom, he’s charged with capital murder in the sheriff’s death last November.

Williams was shot while trying to disperse loiterers at a gas station in Hayneville.

State investigator Lt. Shawn Loughridge testified that Johnson admitted to shooting Williams when he turned himself in the night of the shooting. Loughridge also testified that store surveillance showed Johnson’s brief encounter with the sheriff falling after approaching Johnson’s truck.  The sheriff had reportedly gone to the truck to ask Johnson to turn down his radio. Williams was shot once between his chin and upper lip area Loughridge revealed.

Loughridge says the sheriff, who was wearing plain clothes, responded to the gas station in his county-issued, unmarked car. Surveillance video did not show him flashing his blue lights–though the investigator testified that several witnesses said Williams identified himself as the sheriff.

The investigator also confirmed that a young woman identified as Amber Pittman was shot and injured that night allegedly by the Sheriff’s son – John Williams, Junior. who was riding in his father’s truck. Williams’ attorney, Troy  Teague, said he could not comment further because of a gag order in the case.  So far, no word on if any charges were filed in the second shooting. 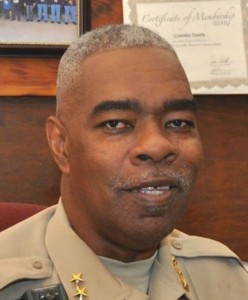