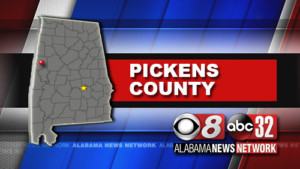 Three people have been confirmed dead in Pickens County due to severe weather.

Birmingham news outlets report the identities of the victims have been released.

Tyrone Spain, 51, Albert Barnett, 85, and his wife, Susan Barnett, 75, were killed after a tornado touched down in Pickens County.

Birmingham TV station ABC 33/40 says at least two of the deaths happened on Settlement Road near the town of Carrollton, the Pickens County EMA confirmed.

Pickens County is west of Tuscaloosa County, on the Mississippi state line. The area had been under a tornado warning late this morning.

Pickens Co EMA has confirmed 3 fatalities associated with the earlier tornado in Carrollton. The threat of severe weather today is serious!! Treat every warning with respect!!! #alwx @ALNewsNetwork