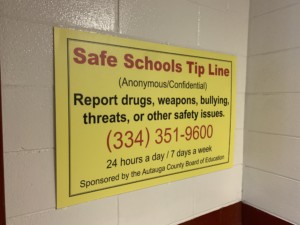 “The safety of our schoolchildren is a vital matter foremost in all of our minds and hearts, and this year we have enhanced the Alabama Safe Schools Initiative Awards to encourage and honor more of those who have implemented strong programs to protect our students, teachers and other staff,” said Attorney General Marshall. “These schools have developed innovative programs and taken practical, effective steps to combat the threat of violence that has become a terrible part of our modern society. Their dedication and resolve to provide a safe haven for learning is an inspiration to us all.”

In presenting the award today Attorney General Marshall said, “The Attorney General’s Office is proud that Prattville Junior High School was selected as one of the winning schools in Alabama for 2019, receiving this distinction for the second year in a row.  In making this decision, judges noted many things that distinguished Prattville Junior High: multiple agencies included in preparation and crisis management, K9 use, visitor entry cameras, a tip line, and mass communication system.”

Principal Janice Stockman said, “Safety is our number one priority, and we are constantly seeking ways to make certain our students are safe physically, emotionally, and academically.  In our world today, that can be a daunting task.  However, it is a privilege to work for our future by serving students today.  Our mantra this year has been to be ‘CAT Strong,’ which entails all stakeholders to cultivate an environment such that students and faculty feel safe to engage in academic and extracurricular endeavors and to take care of one another as a family.  A culture of safety is the bedrock for the PJHS community.”

Winners were selected by a panel of independent judges who reviewed submissions from a total of 124 schools. A list of schools that received the Attorney General’s 2019 Certificate of Building a Culture for School Safety may be found in the Attorney General’s news release of December 19, 2019, available through this link.