Dallas Co. deputies are safer on the job — thanks to a million dollar Weed and Seed grant.

Sheriff Mike Granthum said he was able to buy thirty bulletproof vests for his officers — and ballistic shields to go with them.

“It’s a shield that goes in that will actually stop a rifle round, which most vests that don’t have the plates in them will only stop a pistol round or a smaller rifle round,” said Granthum. 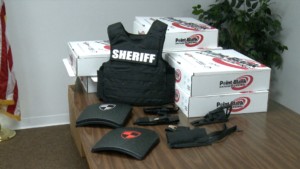 “These actually stop everything up to a 7.62, which is what you see a lot, the SKS, the Ak-47s on the street. This will actually help stop those rounds. We would have only been able to afford one or two a year but with this grant we were able to buy 30 at one time.”

Granthum says he also used money from the grant to buy new rifles and cameras for his deputies.

He says the new equipment will make his deputies safer as they protect and serve.

“As you know this past year was a deadly year for Alabama law enforcement officers. We hope that this will curtail some of that,” said Granthum.

“We hope none of our officers ever get shot but if they do we feel like we’re protecting them. This is the highest level of protection we can give them as law enforcement right now.”

He says Selma PD — and the DA’s office — also got a third.