From the West Alabama Newsroom– The multi-million dollar renovation of the St. James Hotel in Selma — has been going on now for about nine months.

Changes to the façade of the historic hotel — can easily be seen by anyone travelling Water Avenue — but only a select few have seen the changes going on inside the hotel — until now.

“This is the first time we’ve allowed anybody inside the building that was not a contractor,” said Rhaglan Hospitality Regional Director Race Banks.

The first thing people familiar with the hotel will notice once inside — is that there’s now a staircase leading up to the second floor — prominently featured in the lobby area. 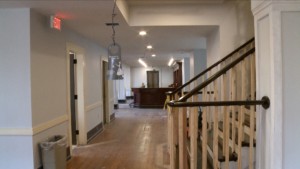 “Our idea was just, as soon as you check in to be able to just turn right there and have a nice grand staircase entrance to your guest room,” said Banks.

“Obviously, we will have the elevator but it was important to us to kind of create you know that 1800s kind of vibe of putting a grand staircase in the lobby.”

Other changes include — a new open floor plan on the first floor. The small cramped walled off spaces that used to be the bar — and a dining room are gone — replaced by a space that Banks says — will tie the bar — the restaurant — and the courtyard together.

“What we want is one continuous food and beverage space. You know just flowing from the bar to the restaurant. Have bar seating, restaurant seating, whatever you might like, using that courtyard, gorgeous courtyard.”

Rhaglan Hospitality is investing more than $3 million dollars to transform the historic riverfront hotel into a Hilton brand property.

Banks says the hotel is set to open sometime around spring.

The Latest: Colts LB Skai Moore latest to opt out of season