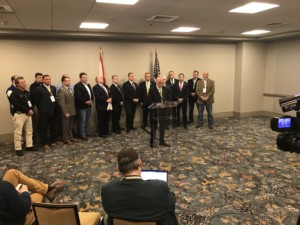 Former US Attorney General Jeff Sessions made a stop in Montgomery Monday where eight Alabama sheriffs and police groups endorsed Sessions for the US senate seat.  The group made the announcement at the Renaissance Hotel in Downtown Montgomery.  They say they believe in Sessions because as senator, he fought for funding that was needed for law enforcement.

Sessions thanked the people he says stood with him and asks for police and sheriff deputies to be supportive throughout his campaign.

The primary election is set for March 3rd.

The Latest: Jakarta mosques reopen at half capacity