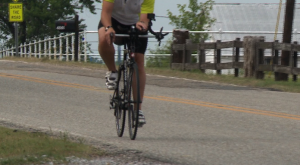 A single-vehicle crash at 2:27 p.m. Saturday, January 19, has claimed the life of a bicyclist.

Scot Guy Angus, 61, of Wetumpka was struck by a 2002 Chevrolet Trailblazer while he was cycling in the roadway and was pronounced dead at the scene.

The crash occurred on Alabama 143 near 16 mile marker, approximately two miles south of Deatsville. The driver of the Chevrolet remained at the scene.

The Latest: Protesters take to NYC streets after curfew