A 17 year old is shot at a high school basketball game in Uniontown. Police say three people have been arrested — but the suspected shooter — remains at large.

The shooting happened at a game between RC Hatch High School — and their cross county rival Francis Marion — Friday night.

Uniontown PD Investigator Sgt. Jamarus Allen says a couple of juveniles left the game just before it was over and got into an argument. 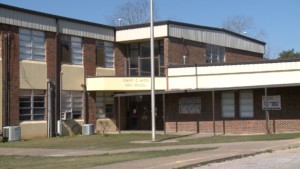 Allen says the argument escalated into an all out brawl involving several people. And during the melee — a 17 juvenile pulled out a gun — and started shooting.

“Everyone was leaving the game and it was vehicles parked everywhere and people was walking to their vehicles — and that’s when the shots rung out and everybody started running,” he said.

Allen said a female Hatch student — who was not involved in the fight — was hit by gunfire. However, her injuries are not life-threatening.

“A young female 17 years of age got struck in the buttocks and it exit through her hip.”

Twenty year old Frank Maiden and 18 year old DeQuindre Ward of Uniontown — and 27 year old Shaquille Martin of Newbern have all been arrested and charged with third-degree assault.

Anyone with information about the shooting — or the whereabouts of the juvenile suspect — call Uniontown Police at (334) 581-5144.