The Courageous Eight fought for Voting Rights for nearly two decades before inviting Dr. Martin Luther King to Selma in 1965

A new book about the group known as the Courageous Eight — was featured at the ‘Lunch at the Library’ series at the Selma-Dallas County Public Library Thursday. 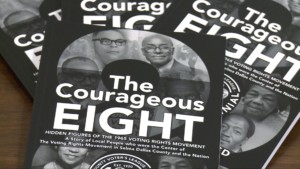 Waheed said the Courageous Eight were all members of the Dallas County Voters League.

He said the book tells the story of how the group spearheaded the fight for voting rights in the county for about 20 years — before inviting Dr. King to Selma in 1965 — which eventually lead to the passage of the Voting Rights Act.

“They were smart enough to know when they needed help and that’s why they invited Dr. King,” said Waheed.

“But also it’s important to know that Dr. King needed help. So when they invited him, he was happy to come because he knew with them, they could work together to make it happen.”