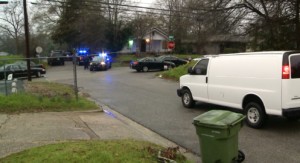 Montgomery Police has identified the victim in the city’s latest homicide.

Officials say 34-year-old Roosevelt Rankins of Montgomery was shot and killed in the 2300 block of Stella Street Thursday afternoon.

First responders arrived on the scene around 3PM Thursday in reference to a person shot. There they located a crashed vehicle with Rankins inside with a fatal gunshot wound. Rankins was pronounced dead on the scene.

MPD and Fire Medics responded to the 2300 block of Stella Street on Thursday, Jan. 23, at about 3 p.m. in reference to a subject shot. At the scene, they located a crashed vehicle. In the vehicle they located Rankins, the driver, who had sustained a fatal gunshot wound and was pronounced dead at the scene.

The initial investigation indicates that the shooting occurred in the 2100 block of Stella Street and the victim left the scene before crashing in the 2300 block.

The case is still under investigation. No arrests have been made at this time.

The Latest: Ukraine could be without Popov for next match

The Latest: Ukraine could be without Popov for next match

UPDATE: ALEA Asking for Public's Help in Investigating I-65 Wreck in Butler County