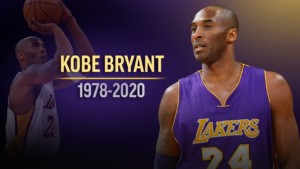 NBA legend Kobe Bryant, his 13-year-old daughter Gianna and seven others were killed in a helicopter crash on a steep hillside in dense morning fog in Southern California on Sunday, his sudden death at age 41 touching off an outpouring of grief for a star whose celebrity transcended basketball.

The chopper went down in Calabasas, about 30 miles  northwest of downtown Los Angeles. Authorities said that nine people were aboard the helicopter and presumed dead, after earlier putting the death toll at five.

News of Bryant’s death rocketed around the sports and entertainment worlds, with many taking to Twitter to register their shock, disbelief and dismay.

There’s no words to express the pain Im going through with this tragedy of loosing my neice Gigi & my brother @kobebryant I love u and u will be missed. My condolences goes out to the Bryant family and the families of the other passengers on board. IM SICK RIGHT NOW pic.twitter.com/pigHywq3c1

“There’s no words to express the pain Im going through,” tweeted Lakers teammate Shaquille O’Neal, who won three NBA titles with Bryant. “@kobebryant I love u and u will be missed. … IM SICK RIGHT NOW.”

“Words can’t describe the pain I am feeling. I loved Kobe — he was like a little brother to me,” Jordan said in a statement. “We used to talk often, and I will miss those conversations very much. He was a fierce competitor, one of the greats of the game and a creative force.”

Bryant retired in 2016 as the third-leading scorer in NBA history, finishing two decades with the Lakers as a prolific shot-maker with a sublime all-around game and a relentless competitive ethic. He held that spot in the league scoring ranks until Saturday night, when the Lakers’ LeBron James passed him for third place during a game in Philadelphia, Bryant’s hometown.

“Continuing to move the game forward @KingJames,” Bryant wrote in his last tweet. “Much respect my brother.”

Bryant had one of the greatest careers in recent NBA history and became one of the game’s most popular players as the face of the 16-time NBA champion Lakers franchise. He was the league MVP in 2008 and a two-time NBA scoring champion, and he earned 12 selections to the NBA’s All-Defensive teams.

Bryant retired in 2016 after scoring 60 points in his final NBA game.

President Donald Trump reacted to the reports of Bryant’s death soon after they began to surface, tweeting: “That is terrible news!”

The cause of the crash was unknown.

The National Transportation Safety Board sent a “go team” of investigators to the site. The NTSB typically issues a preliminary report within about 10 days that will give a rough summary of what investigators have learned. A ruling on the cause can take a year or more.

Investigators will also consider what role might have been played by weather, terrain, radio towers or bird strikes, he said.