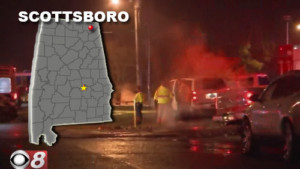 UPDATE: The fire chief in Scottsboro says at least eight people were killed in an explosive fire that consumed at least 35 boats at a marina along the Tennessee River.

Scottsboro Fire Chief Gene Necklaus said all eight people who were known to be missing are confirmed dead, and “that number could go up,” because they don’t know how many were on boats that sank.

Seven people were taken to the hospital with injuries from the flames or the water.

The fire happened at Jackson County Park along the Tennessee River.

The fire started early this morning. The chief said most of the vessels were houseboats. The Jackson County Emergency Management Agency says firefighting and rescue operations have been taking place on land and in the water.

Some boaters had to leap into the water to escape the fire. 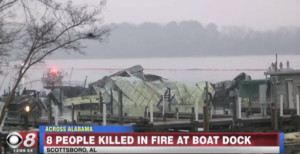 The fire was reported shortly after midnight as people living in the boats were sleeping, and consumed the wooden dock and an aluminum roof that covered many of the vessels, cutting off escape routes and raining debris into the water.