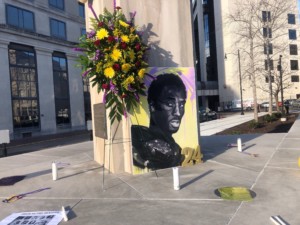 The city of Montgomery is coming together to remember the life and legacy of NBA legend Kobe Bryant. A vigil was held in Downtown Montgomery at the fountain at 1 Court Square Tuesday.

Kobe, his 13-year-old daughter Gianna and 7 others died in a helicopter crash Sunday morning in California.

He was a five-time NBA champion, an 18 time all-star, and he was two time olympic gold medalist, but tt was Kobe’s work off the court that inspired millions.

HAPPENING NOW: A vigil in memory of #KobeBryant and 8 others who died in a helicopter crash Sunday is about to get started in Downtown Montgomery. The vigil is at the fountain at 1 Court Square and is from 4pm-7pm. pic.twitter.com/58qAheedKm

Vigils just like this have been held all around the world since his death.