Three registered sex offenders are arrested during a sex offender check this week in Dallas County. 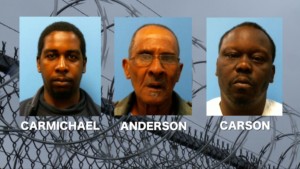 Granthum says warrants have now been issued for the arrest of the other five.

“We want to make sure that our children are safe and our public is safe,” he said.

“So, it is very important that when they get released from prison or the jail, they immediately have to come in the 24 to 48 hours and register with us at the sheriff’s office and they’re going to be checked. We check jobs, we check to make sure they are not within a school, which to me that’s very, very important. And also we check to make sure there is no children in the house.”

Granthum says there are a total of 49 sex offenders registered in Dallas County. He says 41 of them were found to be in compliance during the sweep.