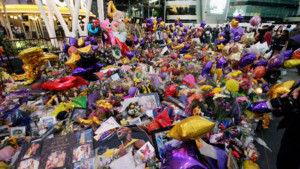 Fans gather at a memorial for the late Kobe Bryant in front of Staples Center in Los Angeles, Sunday, Feb. 2, 2020. Bryant, the 18-time NBA All-Star who won five championships and became one of the greatest basketball players of his generation during a 20-year career with the Lakers, died in a helicopter crash Sunday, Jan. 26. (AP Photo/Damian Dovarganes)

A massive memorial created by the public outside Staples Center after the death of former Lakers superstar Kobe Bryant is being dismantled, with an official saying some of the items will go to Bryant’s widow.

Staples Center President Lee Zeidman says the cleanup of flowers, balloons, jerseys, stuffed toys and other items began at 4 a.m. Monday, and more than 1,300 basketballs had been boxed up by midmorning.

Fans spontaneously began creating the memorial in a plaza outside the arena when word surfaced that Bryant, his daughter Gianna and seven other people were killed in a helicopter crash on January 26, and it continued to grow for a week.