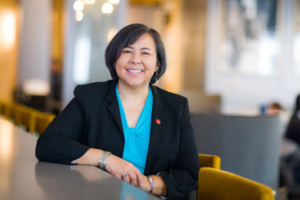 Photo of Margaret Huang – From SPLC

The Montgomery-based Southern Poverty Law Center has announced that Margaret Huang has been named as the SPLC’s new president and chief executive officer. She will take her position on April 20.

In a news release, the SPLC says Huang, who is executive director of Amnesty International USA, has devoted her 25-year career to championing the rights of others, working for justice, fighting for human dignity and advocating against discrimination and oppression in the U.S. and around the world.

“I am thrilled to be joining the Southern Poverty Law Center at this moment and with this incredible staff and board as they rethink how to tackle their work fighting for justice and against hate,” Huang said. “Change in the South is coming, and SPLC is eager to work collaboratively with other social justice advocates to ensure that the change improves the lives of all communities.”

“This is an exciting time at SPLC and I am thrilled that the Board has chosen Margaret to lead the organization and staff into the future,” said Baynes-Dunning, who will continue her role until Huang joins the organization in April. “She is a visionary, an extraordinary leader and we are proud to have her in the march toward justice.”

SPLC Board Chairperson Bryan Fair made the announcement via email this morning to the organization’s 350 employees in offices in Alabama, Florida, Georgia, Mississippi, Louisiana and the District of Columbia. In his email, he said the internal search committee, comprised of staff and board members, sought “a leader with a distinguished social justice record, a proven commitment to diversity, equity, and inclusion, strong management skills within a large social justice organization, and ingenuity and vision.”

“That led us to Margaret,” Fair said. “In her we have found those characteristics and more. Margaret’s leadership, passion for justice and strong track record of initiating and leading change, strengthening organizations, and innovating amid a rapidly changing legal and political landscape make her the best candidate to lead SPLC’s continued transformation.”

Huang, a Tennessee native, previously served as the executive director of the Rights Working Group, which focused on protecting human rights and civil liberties of communities in the post-September 11 era. She also served as director of the U.S. program at Global Rights, program director of the Robert F. Kennedy Center for Human Rights, program manager at The Asia Foundation, and committee staff for the U.S. Senate Foreign Relations Committee. She received a Master of International Affairs from Columbia University and a Bachelor of Science in Foreign Service from Georgetown University.

Latest: Alaska seeing one of sharpest COVID-19 surges in US