Riverfront Sinkholes Cause Concern in Selma

A series of sinkholes on the riverfront in Selma has city leaders concerned for the safety of people who visit Riverfront Park.

A massive sinkhole has formed near the concrete steps leading down into the park.

City engineer Ray Hogg says the sinkhole is about 15 feet wide — and 15 feet deep. He says its the biggest of a series of cave-ins caused by the failure of an old drainage conduit — that’s been in use — since the late 1800s. 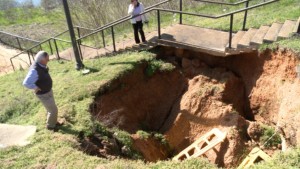 “They didn’t have pipe back then but they had a lot of brick. They would make these drainage structures out of brick. Most of them have flat bottoms perpendicular walls and rounded on top. This one happens to be round,” he said.

“I’m pretty sure that it drains all the rainfall runoff on Water Avenue for a certain length of the street. When the failure occurred? Who knows? It just started showing up 6 or 8 months ago when there started to be a cave-in up here.”

Hogg says the drainage conduit failure won’t cause any flooding — but if left unchecked — the cave-ins will only get worse.

Hogg says the cave-ins also pose a serious safety concern for people. He says the city is closing off access to the area — so that no one gets hurts.

He says the project to fix the sinkhole problem — will cost the city more than $110,000 dollars.