A Hale County man is behind bars tonight — charged with robbing a bank in Perry County.

Sheriff Billy Jones says the suspect apparently took a day off from his job — to travel over to the town of Marion — and rob a bank.

Harris was arrested Thursday evening — after being identified as the person who robbed Marion Bank and Trust earlier that day. 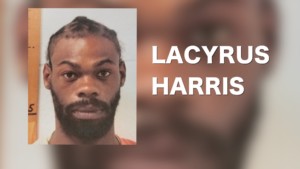 Officials with the Perry County Sheriff’s Office and the Marion Police Department outlined the facts of the case at a press conference Friday morning.

“He came into the bank. He had a note wrote. On the note it was saying put the money in the bag and don’t say nothing or he would kill her,” said Marion Police Chief Patrick Essex.

“He just made the threat, you know, with his hands in his pockets. We don’t know whether he had a gun or not at this time.”

Authorities say the teller handed over an undisclosed amount of cash — aand after that Harris ran out of the bank. They say the incident was caught on tape by the bank’s video surveillance system. And they were able to use the video — to identify Harris as the robber — and track him down.

“He got away with money, unknown amount, we don’t know at this time. But we did put him in custody at his home.,” said Essex.

Sheriff Jones says Harris was also fingered for the robbery — by the bank teller — and other eyewitnesses.