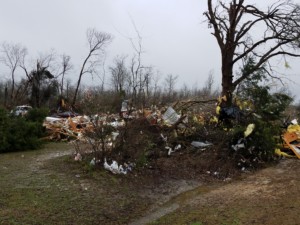 The National Weather Service has inspected the area in Marengo County where a storm hit early yesterday morning. A team has determined it was a tornado that touched down.

The tornado destroyed two mobile homes and a barn and damaged two homes. The tornado touched down near the intersection of U.S. Highway 43 and County Road 54, south of Demopolis.

As Alabama News Network has reported, a woman was killed inside one of the mobile homes. A man who was inside was injured, but three children who were also there were not hurt.