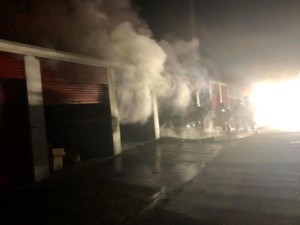 Several storage units had to be cut open Monday, as crews battled an early-morning fire at the Red Dot storage facility in the 6300 block of Atlanta Highway.

It was a similar scene at another self-storage fire in November. Fire fighters cut through dozens of locks to try and extinguish the blaze.

“They are not connected, we are still investigating the fire at the Red Dot storage facility. The storage facility from earlier that was ruled accidental in nature” said Lt. K.R. Peoples of Montgomery Fire and Rescue.

The cause of Monday’s fire is under investigation. Authorities say a woman was treated on the scene for minor injuries.

The November fire has been ruled electrical Peoples said, likely an unauthorized attempt to alter a socket. “The storage facilities actually have rules and regulations in place and its a good idea to follow those rules, because failure to follow them leads to fires” he warned.

Red Dot storage staff declined to comment on Monday’s fire. On the same street, the owner of Ala-Stor says the recent blaze is why she stresses the list of prohibited items from smoking to small appliances. “If they have anything plugged in or if they even leave a light on that could be a hazard” explained Cecilia Ryals.

Most self storage units don’t allow vehicles or even lawn equipment if there’s still gasoline in the tanks but even for customers like Michelle Jackson, that aren’t storing these items,  it’s a good idea to consider protection. “Hopefully they had renters insurance or something that covered their belongings” she said sympathizing with the renters of the 10 units that were damaged in Monday’s fire.

Fire officials will continue to investigate Monday’s blaze, but said it appears to be accidental at this time.