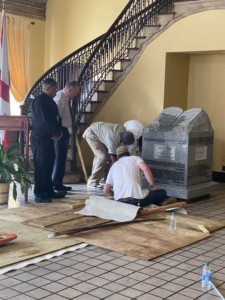 The Ten Commandments Monument is back in the Capital City, years after its removal from the Supreme Court building rotunda in 2003.

Judge Roy Moore and his wife Kayla announced the decision to move the monument to the first floor of the Foundation for Moral Law at 1 Dexter Avenue.

Moore created the foundation, which fights for religious liberties. His wife now runs the organization as president.

The monument is now located blocks away from where it controversially sat inside the state judicial building, before it was removed after a federal court order ruled it unconstitutional.

Moore appealed that ruling and refused to remove the monument. That decision ultimately led to his removal from the bench as Supreme Court justice.

He says he’s proud to have the monument brought back to Montgomery.

“It means a lot. This means so much to me because its a major thing that affects our country today. This would unite people. Why would they object to it? Our country’s divided- Republican, Democrat, rich, poor, old, young. It’s not the way it was meant to be,” Moore said.

Since its removal, the monument was held at a church in Gadsden, Alabama.

Moore says the building will now be the final resting place for the monument. He says there are plans to eventually open the monument to the public.

Cool And Breezy Monday; Rain Due To Beta Later This Week