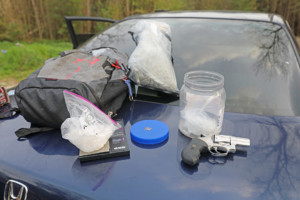 Four people are being held in the Covington County Jail on drug-related charges after the 22nd Judicial Circuit Drug Task Force attempted to serve a warrant and several people fled the scene.

DTF Commander Mark Odom said agents had a warrant for the arrest of Shundraiaus M. Curry for two counts of distribution of a controlled substance. The warrants were the result of a months-long investigation. When they arrived at a residence at the intersection of Eighth Avenue and Fourth Street to serve the warrant, several subjects fled.

“One had a backpack,” Odom said. During the foot pursuit, the backpack was tossed, but later recovered after Agent Ken Harris apprehended the suspect, Dominique Terrell Curry, 35. The backpack contained  large amounts of methamphetamine and marijuana, as well as a .357 handgun. Curry was charged with drug trafficking, possession of marijuana first, possession of drug paraphrenia, and attempting to elude. Additional charges are expected.

A fourth person, Arna’zha A. Armstrong, 23, was charged with possession of marijuana second and possession of drug paraphernalia.

Odom expressed his appreciation to the Andalusia Police Department and the Alabama State Troopers for their assistance at the scene.

APD Chief Paul Hudson said he appreciates the work of the drug task force in getting illegal drugs off the city’s streets.