Two University of Alabama men’s basketball players have won the league’s weekly awards as guard Kira Lewis Jr. was named the Southeastern Conference’s Player of the Week and guard Jaden Shackelford earned the league’s Freshman of the Week, which were both announced by the conference office Monday.

It marks the first time in program history that the Crimson Tide has swept the weekly honors dating back to the 1990-91 season when the SEC began what was then called the Rookie of the Week award. 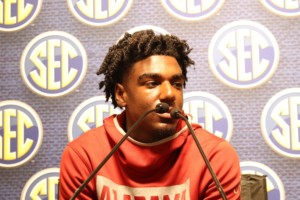 Lewis, a 19-year old sophomore, claims his second player of the week honor this season (was named the SEC Player of the week back on Jan. 27) and the third overall weekly award for his career (named Freshman of the Week on Dec. 2010, 2018) after an outstanding week on the hardwood.

The Meridianville, Ala., native averaged 18.5 points, 8.5 assists, 5.5 rebounds, 2.5 steals and 1.0 block in a pair of contests against ranked opponents. He began the week by becoming only the second player in program history to record a triple-double with 10 points and career highs of 10 rebounds and 13 assists in the 95-91 overtime loss at No. 11 Auburn. Twelve of his 13 assists on the night directly resulted in made threes for the Tide. The 6-foot-3, 167-pound point guard also led the Tide in scoring with 27 points, shooting 10-of-18 from the floor and 4-of-6 from beyond-the arc, to go along with four assists and three steals in helping lead the team to an 88-82 win over No. 25 LSU. 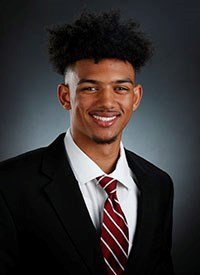 Shackelford, a 6-foot-3, 195-pound freshman from Hesperia, Calif., averaged 27.0 points, 4.5 rebounds, 3.0 assists and 1.5 steals in the Tide’s two contests last week. He hit 7-of-17 treys – both career-bests – to help the Tide set SEC single-game records for threes made (22) and attempted (59) against Auburn. He finished with 28 points against Auburn and followed that up with 26 points against LSU, sinking 50.0 percent (9-of-18) of his shots from the floor and five treys in the victory.

Lewis’ honor marks the first time an Alabama player has earned Player of the Week twice in one season since senior guard Retin Obasohan in the 2015-16 season. Shackelford is the first Alabama rookie to win the league’s weekly award since Lewis last season during the week of Dec. 10.

The Crimson Tide will return to action Wednesday night, when it takes on Texas A&M for the first time this season in Coleman Coliseum. The game will tip off at 6 p.m. CT and will be televised on SEC Network.

A Full Review: Longshore's Predictions from May 2019 - Part Two