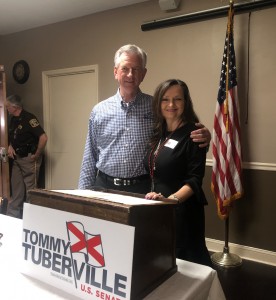 Tuesday marks fourteen days until “Super Tuesday”, where voters will cast their ballots to determine who they will send to Washington D.C. the U.S. senate. Candidates are kicking their campaigns into high gear as the race that once seemed like a marathon transitions into a sprint.

“I look at it as you know in coaching the two minute drill. Coaches don’t look at the scoreboard we just keep pounding until the clock strikes zero”, Tubberville says.

Coach went on to say that he has enjoyed the last 11 months noting that his favorite portion of the campaign trail has been meeting the great people of our state.