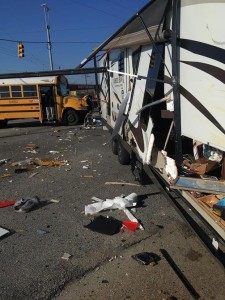 The accident happened at Woodley Road and East South Boulevard in Montgomery.

Montgomery Public Schools tell Alabama News Network that a bus driver had a minor injury, but did not need treatment. A student and aide were also on the bus, but we’re not injured. No word on the condition of the other drivers.

Officials have not said what caused the crash.

The Latest: Italy urges citizens to keep guard up on virus