According to Alabama lawmakers, the plan to house passengers testing positive for the coronavirus in a FEMA center in Anniston has been cancelled.

Rep. Mike Rogers and Senator Richard Shelby (R-AL) both tweeted saying after speaking with President Donald Trump the plan to bring cruise ship members affected by the Coronavirus has been canceled. 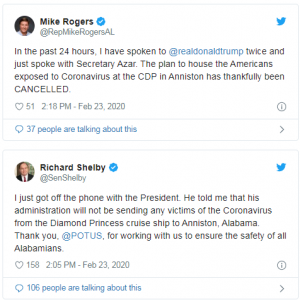 This comes after the city of Anniston and the Calhoun County Commission held public information meetings to alert the communities in the area over the weekend.

Governor Kay Ivey issued a statement after the Department of Health and Human Services announced their plan on Saturday.

From Governor Kay Ivey:
“Late Friday night, the U.S. Department of Health and Human Services (HHS) informed me about their proposal to transport Americans who have tested positive with the Coronavirus (COVID-19) from the Diamond Princess cruise ship to a FEMA Center for Domestic Preparedness (CDP) in Anniston.  Sensing the urgency, I quickly informed the offices of Senators Richard Shelby and Doug Jones and Congressman Mike Rogers, as well as Dr. Scott Harris with the Alabama Department of Public Health.

“On Saturday, it appears that a press release from HHS was inadvertently, and perhaps prematurely, sent notifying the State of Alabama that these individuals were scheduled to begin transporting to Alabama as early as Wednesday.

“Obviously concerned, there were a number of conversations between HHS, the White House, my staff and me, as well as two rounds of conference calls including the senior staff of the Congressional Delegation to try to clarify HHS’ intent and reasoning for selecting Alabama. On one of the calls, they informed us that the CDP in Anniston is only being considered as a “back-up” plan, in case they run out of alternative locations. They assured us on both calls that no decision had been made to send anyone to Anniston.

“I made it abundantly clear that while the State of Alabama wants to work closely with the Trump Administration to assist fellow Americans who may have tested positive for the Coronavirus, there were some grave concerns about why the site in Anniston was chosen and how, logistically, this would play out in the event this back-up site were to be eventually activated.

“First and foremost, my priority is to protect the people of Alabama. While locating these folks in Alabama is currently a backup plan, this is a serious issue and we need to be fully aware of the facts regarding the potential of housing them in Anniston.

“I am grateful to Senator Shelby and his team for coordinating today’s effort to send officials from HHS to Alabama to provide further clarity to this situation. I also appreciate Congressman Rogers for speaking with the President and informing him of the concern of the people of Alabama. Through these coordinated efforts, we will begin a process that will be transparent, and hopefully find a solution of which we are united and comfortable with.”