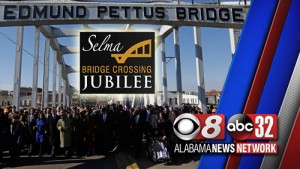 Bloody Sunday happened on March 7, 1965. That’s when hundreds of people marched across the Edmund Pettus Bridge in Selma to call for equal voting rights. They were met by dozens of Alabama State Troopers who beat them. That event brought Rev. Dr. Martin Luther King, Jr. and thousands of people from across the country to Selma two weeks later to march from Selma to the Alabama Capitol in Montgomery and led Congress to pass the Voting Rights Act.

This year’s event features a Presidential Candidates Forum, which will be held at Wallace Community College in Selma on Sunday at 4 p.m.

Other notable events include:

More about the Bridge Crossing Jubilee

Record 16.8 Million in U.S. Have Filed for Unemployment Since Virus Began

State Troopers on Scene of Deadly Wreck in Elmore Co.