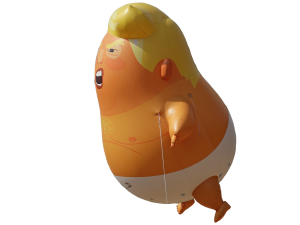 An Alabama man arrested for slashing a towering protest balloon depicting President Donald Trump as a baby has been ordered to attend counseling and complete community service for a chance at getting the charges dismissed.

According to reports, if Hoyt Hutchinson, 32, finishes the Tuscaloosa County District Attorney’s diversion program, the case and charges against him could be removed from his record. Hutchinson will also be required to pay $3,500 to the group that rents out the 20-foot-tall inflatable.

Hutchinson’s accused of deflating the diaper-clad “Baby Trump” during a University of Alabama football game the President attended in November.