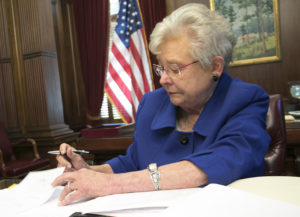 Last month, Montgomery City Council approved a 1% occupational tax ordinance by a vote of 5 to 3. The vote came after a senate committee voted 8 to 2 in favor of a bill that would require Alabama’s cities to ask permission from state lawmakers before enacting occupational taxes.

The property tax would require anyone who works within the city limits of Montgomery to pay that 1% tax. Montgomery Councilman Glen Pruitt said the tax increase could generate somewhere between 45 to 55 million dollars and would go toward increasing salaries for first responders and sanitation workers.

Alabama News Network confirmed, “Governor Ivey had a great conversation with Mayor Reed. She truly appreciates the challenges facing municipal leaders throughout the state. There is a strong case that occupational taxes provide various services to those who work in the city of Montgomery but live elsewhere. However, the governor has also heard from many of the thousands of state employees who live in neighboring communities but work in Montgomery. They are equally passionate about the feeling that they are being punished with a higher tax, yet don’t have either a voice or a vote on this matter. Moreover, these state employees contend they shop, dine, visit doctors and spend a lot of their discretionary income in Montgomery. The governor encourages city leaders to work closely with members of their Legislative Delegation to try to address some of these concerns.  As such, the governor has signed HB 147 in order to look after those who had no vote or voice in this matter.”

Rice goes up against Our Lady of the Lake