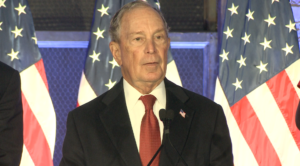 Billionaire Mike Bloomberg has ended his bid for the Democratic presidential nomination and has endorsed Joe Biden. It was a stunning collapse for the former New York City mayor, who had pinned his 2020 hopes on the Super Tuesday states and drained more than $500 million from his own fortune into his ultimately unsuccessful campaign. Bloomberg announced his departure Wednesday after a disappointing finish on Super Tuesday in the slate of states that account for almost one-third of the total delegates available in the Democratic nominating contest. Some of his former Democratic rivals had coalesced around Biden as the moderate alternative to Vermont Sen. Bernie Sanders.