Montgomery Public School leaders are proud to be turning a new leaf, after regaining its full accreditation status.

The good news was the purpose of a special called board meeting Monday, after nearly two years of it’s accreditation status being “under review”.

“This status now belongs to you because you are MPS… I knew we could do it from the very beginning” said MPS superintendent Ann Roy Moore thanking the dozens of MPS educators and principals who were in the packed room. It was very stressful at times for those who were on the “front lines” of the system’s efforts to maintain accreditation Moore said.

The gratitude and applause came just after Andre Harrison, senior director of Cognia gave a detailed presentation. The internationally recognized accrediting board that was formerly known as AdvancED.

In May 2018 the accrediting board announced that MPS’ accreditation status was changed to “accredited, under review” after a special review revealed that the school system was lacking in key areas. The review team evaluated a list of standards focused on finances, leadership , learning, and resource capacities in the school system.

Of the 31 standards that were reviewed, 19 of them were listed as ‘needs improvement’- the lowest possible score at the time.  Only one met expectations, and none exceeded expectations. (read more about the May 2018 report here .)

MPS officials were told then, the system would have to make drastic improvement to avoid losing its accreditation.  Cognia conducted monitoring reviews during the 2018-2019 academic year to evaluate the systems progress in preparation for a pending Accreditation Engagement review in Spring 2019.

MPS showed some improvement during follow-up visits, according to updates from Cognia in February 2019, and again in July 2019, but not enough  to change its status.

Monday’s update, was the result of a three-day visit by a 10-person Cognia review team in early February. The team conducted a total of 546 interviews, talking with stakeholders that range from school board members to students. Team members observed 90 classrooms, “and you must stay in the classroom at least 20 minutes minimum”  Harrison explained.

These observations measured whether students are in a learning environment that is supportive & active with opportunities for digital learning, and how students’ progress is being monitored.

Here’s a look at a side by side comparison Harrison showed of  MPS’ performance standards ratings in March of 2018 (left) compared to February 2020 (right). 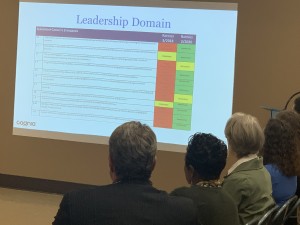 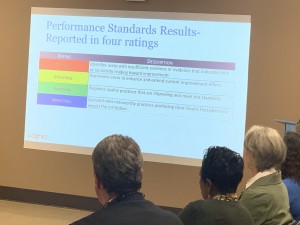 In the “Leadership Domain” area alone – MPS showed improvement in all 11 areas of focus. Nine were ranked as improving and two as initiating.

All the standards in the “Learning Capacity Domain” were ranked as improving (green).

In the “Resource Capacity Domain”, all but one were also ranked as improving (green)– MPS earned the the initiating rank (yellow) for a lack of digital learning resources provided to teachers.

MPS was not rated insufficient– the lowest ranking–in any areas however, the it was also not ranked “impacting” (blue) rankings, the highest of the four ratings either.

MPS remains under state intervention, though Moore says the updated accreditation report is promising and believes that the end of the intervention could be near.

School systems typically have their accreditation status evaluated every 5 years.  Officials with Cognia say they’ll continue to monitor the school system before its next review. You can see the full presentation with more on how MPS is being evaluated  HERE.