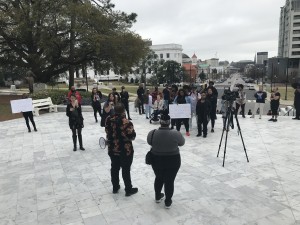 About 50 family members and friends of Nathaniel Woods were at the State Capitol to see Governor Kay Ivey. They wanted to discuss the lethal injection execution of Woods last week.

The protest was led by Jamel Brown and Woods’ daughter, and they entered the Capitol and was given a letter. The letter was said to be from the governor. Brown said the letter was unsatisfactory and the daughter ripped the letter up.

Protesters at the rally said that they wanted an apology from Governor Ivey and to retry the case. They said that the judicial system in Alabama is unfair to black and brown people. They called the lynching of Woods a modern day lynching.

Woods was executed for the 2004 slaying of three Birmingham police officers.