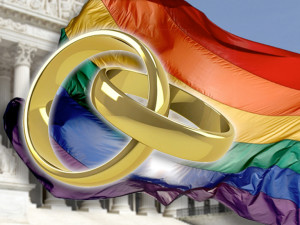 On Thursday, the Foundation for Moral Law, an Alabama-based nonprofit, filed an amicus brief at the U.S. Supreme Court, asking it to reconsider Obergefell v. Hodges, which held that the states must recognize gay marriage.

After the Sixth Circuit ruled against her, Davis filed a petition for a writ of certiorari with the Supreme Court, arguing two points. First, she argued that Obergefell did not answer the question of whether her religious beliefs entitled her to recuse herself from issuing same-sex marriage licenses. Second, she argued that the same-sex couples could have gotten marriage licenses from anywhere else in Kentucky, not just from her. She noted the change in the Court’s make-up, the Foundation filed an amicus brief arguing that the Court should take this opportunity to reconsider Obergefell altogether.

Matt Clark, the lawyer who wrote the brief, said, “The Supreme Court’s decision in Obergefell could not be logically deduced from the text of the Constitution or found in the longstanding traditions of our people. Obergefell not only perverted the Constitution and changed the definition of marriage, but it also jeopardized the religious liberty of Kim Davis and millions of Americans who object to same-sex marriage.”

Kayla Moore, the Foundation’s President, added, “We commend Kim Davis for doing the right thing. Now that Justice Kavanaugh has replaced Justice Kennedy, we hope that the Supreme Court will once again allow the states to recognize marriage for what it is: a union between one man and one woman for life.”

The Latest: WHO concerned about coronavirus in Mideast

US economy grew at record 33.1% annual rate last quarter in rebound from virus-caused plunge, but recovery is incomplete