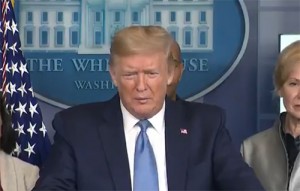 President Trump, joined by other government leaders for a news conference this afternoon, has issued stricter guidelines in an effort to stop the spread of coronavirus.

The new guidelines call on U.S. residents to avoid groups of more than 10 people, to avoid eating or drinking in restaurants, food courts and bars and encourages schools to close to allow students to take classes from home.

President Trump and other officials had a special message for younger Americans. Some have criticized the younger age group for not heeding the guidelines as they congregated for social events over the weekend.

President Trump: “It’s important for the young and healthy people to understand that while they may experience mild symptoms, they can easily spread this virus and they will spread it indeed, putting countless others in harms way.” https://t.co/1wEDgf5m4I pic.twitter.com/irrhC3w0Xd

President Trump encouraged Americans to avoid discretionary travel. But he said at this point, the White House is not considering domestic travel restrictions.

Dr. Anthony Fauci, the director of the National Institute of Allergy and Infectious Diseases says the new guidelines are in place for at least 15 days, but “the trajectory of the outbreak” could go until July.

President Trump said when asked by a reporter how long it would last, replied, “people are talking about July, August, something like that.” He said he likes to say it “washes through” but “other people don’t like that term.”