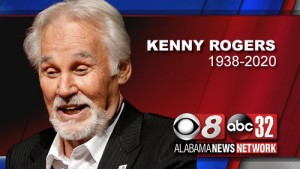 Tributes are coming in from across the music and entertainment world for country music superstar Kenny Rogers.  His family announced that he died last night at the age of 81.

The Rogers family is sad to announce that Kenny Rogers passed away last night at 10:25PM at the age of 81. Rogers passed away peacefully at home from natural causes under the care of hospice and surrounded by his family. https://t.co/adxAgiMW2s pic.twitter.com/nggWiiotMT

While Rogers had worked with many other artists over the years, he was closely associated with fellow superstar Dolly Parton, who posted her own personal thoughts this morning:

You never know how much you love somebody until they’re gone. I’ve had so many wonderful years and wonderful times with my friend Kenny, but above all the music and the success I loved him as a wonderful man and a true friend. pic.twitter.com/hIQLIvt8pr

Due to concerns over coronavirus, his family is planning a small private funeral, with hopes for a public event with friends and fans later.

Rogers career included massive hits such as “Lucille,” “Lady” and “Islands in the Stream.” He sold tens of millions of records, won three Grammys and was the star of TV movies based on “The Gambler” and other songs, making him a superstar in the ’70s and ’80s.

A new generation of music stars are taking time to remember his life and achievements:

I can’t express on twitter the impact Kenny Rogers the artist and the man had on me. He was always very kind and fun to be around. Rest In Peace Gambler…