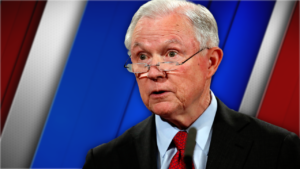 President Trump’s campaign has sent a letter to Jeff Sessions, his former attorney general now running to reclaim his U.S. Senate seat in Alabama, objecting to Sessions’ portrayal of himself as a Trump supporter in a campaign mailer.

The March 31 letter sent by Michael Glassner, chief operating officer of Donald J. Trump for President, accused Sessions of attempting to “misleadingly promote your connections to and ‘support’ of Trump,” in the campaign mailer that mentioned Trump’s name 22 times.

“The letter even makes the delusional assertion that you are President ‘Trump’s #1 Supporter,’” Glassner wrote.

“We only assume your campaign is doing this to confuse President Trump’s loyal supporters in Alabama into believing the President supports your candidacy in the upcoming primary run-off election. Nothing could be further from the truth,” Glassner wrote.

Before becoming attorney general, Sessions was the first U.S. senator to endorse Trump, donning a Make America Great Again hat at an Alabama rally. But his public falling out with Trump has threatened his hopes of recapturing his Senate seat.

Sessions gave up the seat he held for 20 years when he was appointed Trump’s attorney general. He resigned when his 2017 recusal from the Russia inquiry sparked blistering criticism from Trump.

The runoff has been rescheduled for July 14 from March 31 because of the coronavirus outbreak.

The letter from the Trump campaign read: “We want to be absolutely clear about it: President Trump and the Trump Campaign unambiguously endorse Tommy Tuberville.” The letter was first reported by The New York Times.

According to the Sessions campaign, the mailer that drew the objections of the Trump campaign was sent several days before Trump made his March 10 endorsement of Tuberville.

The Sessions camp said Thursday night that Alabama voters will decide the race.

“The people of Alabama are going to decide this race, not Washington. Alabamians are an independent lot and they make their own decisions. Our campaign is resolutely focused on the important challenges facing America, and the critical issues to Alabama and our economy,” Sessions spokesman John Rogers said in a statement.