Suspect in Murder of Aniah Blanchard Has His Preliminary Hearing Delayed 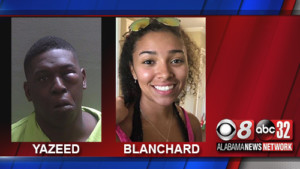 Ibraheem Yazeed, the prime suspect in 19-year-old Aniah Blanchard’s kidnapping and murder, has had his preliminary hearing delayed.

Yazeed is now due in court on June 3.  That’s because the coronavirus outbreak has delayed court cases. His hearing had originally been scheduled for March, then had been moved to April.

He is being held in the Lee County Jail without bond since his November 8 arrest in connection with the Blanchard case.

Yazeed is charged with two counts of capital murder. One count is for murder committed in a car through the use of a deadly weapon while the victim is in a vehicle, and the other is for murder during a kidnapping in the first degree.

Yazeed was later taken into custody in Pensacola, Florida, and charged with kidnapping Blanchard.

Blanchard’s remains were found in the Shorter area of Macon County. Investigators say she had been shot to death.