A small town Dallas County farm boy will soon be headed to the big city — with a chance to live out his dream of playing pro football in the NFL.

Twenty-three year old Lachavious Simmons is a monster of a man. He stands 6’5″ — weighs 315 lbs — with a 7 foot wingspan. And his hands — are huge.

Simmons is a perfect fit to join the Monsters of the Midway. The Chicago Bears drafted him in the 7th round of the NFL Draft on Saturday.

“It’s a blessing man. You just got to keep your head down and keep working.” 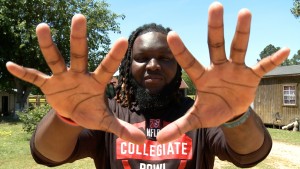 Hard work is nothing new for Simmons. He grew up doing chores and tossing around bales of hay on his family’s farm in Orrville.

A strong work ethic, character and versatility made Simmons a standout at Tennessee State University — where he played multiple positions on the offensive line.

“I played guard and tackle. I played left guard, left tackle. Right guard and right tackle. And they liked the versatility I have.”

Simmons has been talking with Bears coaches — going over plays — and working out. And he’s eager to take advantage of the chance of a lifetime.

“You can’t get comfortable,” said Simmons.

“Because it don’t matter if you’re a 1st rounder or a 7th rounder or an undrafted free agent. Whoever come up and show up and work every day and show they the best man, that’s whose going to play. And that’s who gone get paid. So, that’s how it works.”

“He just got to keep working hard and just keep focus and it’s going to work out for him,” he said. “God got him.”

He played high school football at Selma High School — where he also played basketball and baseball.