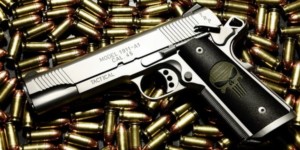 On Wednesday, April 29, Mitchell Evan Gandy, 32, Evergreen, was sentenced to 48 months in prison for being a felon in possession of a firearm, announced United States Attorney Louis V. Franklin, Sr. Following his prison sentence, Gandy will be on supervised release for three years.

Gandy was indicted by a federal grand jury in August 2018 on one count of possession of a firearm by a convicted felon. He pleaded guilty to that charge on January 29.

According to court records, on February 14, 2018, a deputy stopped Gandy for speeding while he was traveling in Covington County. When the deputy approached to speak to the driver, he detected a strong smell of marijuana coming from inside the vehicle and asked him to step out of the car. When law enforcement officers searched the vehicle, they found two handguns—­ a Glock 9mm and a Zastava 7.62mm. Gandy has multiple felony convictions and is prohibited from possessing a firearm.