From the West Alabama News Network–

A routine traffic stop in in Dallas County leads to a major drug bust.

Sheriff Mike Granthum says a deputy stopped a vehicle without a tag on the Selma Bypass Sunday night. 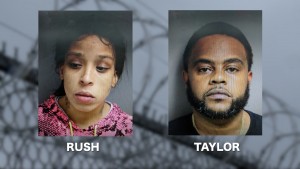 He says crystal meth — marijuana — pills — a gun — and cash — were found in the vehicle.

“These drugs in large amounts wasn’t for their personal use. We think they’re distributing these drugs in our community which is not good and we’re going to rid them. If we can go federal with any of these cases, we’re going to do it,” said Granthum.

Rush and Taylor are each being held in the Dallas County Jail on $1.5 million dollar bonds.