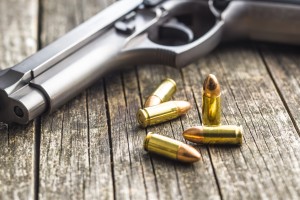 On Friday, May 8, Calvin Lee Morris, 34, of Banks, was sentenced to 40 months in prison for being a felon in possession of a firearm, announced United States Attorney Louis V. Franklin, Sr. Following his prison sentence, Morris will be on supervised release for three years. There is no parole in the federal system.

According to court records, on February 2, 2018, Morris was standing in the parking lot of Walter’s Grocery in Bullock County and fired several shots at a man in a vehicle as he was driving away from the store. Although multiple rounds were found in the man’s car, including one in the headrest, he was not injured in the shooting. Surveillance camera footage recovered from the store confirmed that Morris was the gunman. Morris was arrested on February 21, 2018 in Banks, with assistance from the Gulf Coast Regional Fugitive Task Force. During the arrest, officers discovered Morris was in possession of a loaded 9mm pistol, which was found to be the same pistol used to shoot at the man’s car at Walter’s Grocery. During the sentencing hearing, it was revealed that Morris has an extensive criminal history and has had a number of previous encounters with law enforcement that indicate violent tendencies.

Morris was indicted by a federal grand jury in October 2019 on one count of possession of a firearm by a convicted felon. He pleaded guilty to that charge on December 18, 2019. Additional state charges related to the shooting are pending.