A brokenhearted mother is crying out for justice — after her son is gunned down earlier this week in Dixons Mills.

Fifty-seven year old Nadine Monghan has now had to bury all three of her adult sons.

Parker was shot and killed Monday — at the intersection of County Road 6 — and Pineywoods Road.

Fifty-six year old James Startley of Blountsville is charged with his murder.

Startley was in the Dixons Mills area working on water lines. 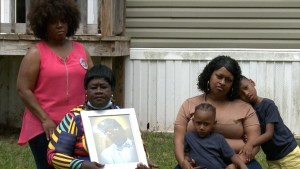 His cousin Katrina Sewell says its just another another instance of a white shooter — killing a black victim — then claiming he was in fear for his life — to try and justify it.

“If you look at several cases, even the most recent case with the young man in Georgia, how long it took them to even make an arrest for this. And you had footage showing that these individuals had actually shot this guy,” said Sewell.

Monghan says justice for “Wookie” — and his four children — is all the family wants.

“We just want to make sure that this is not another case of an unsolved murder in Marengo County,” said Sewell.

“Imma do what ever it takes for me to do — for my child to get justice,” said Monghan.

The shooting that killed Parker remains under investigation.

Anyone with information about the shooting call investigators at the Marengo County Sheriff’s Office at (334) 295-4208.